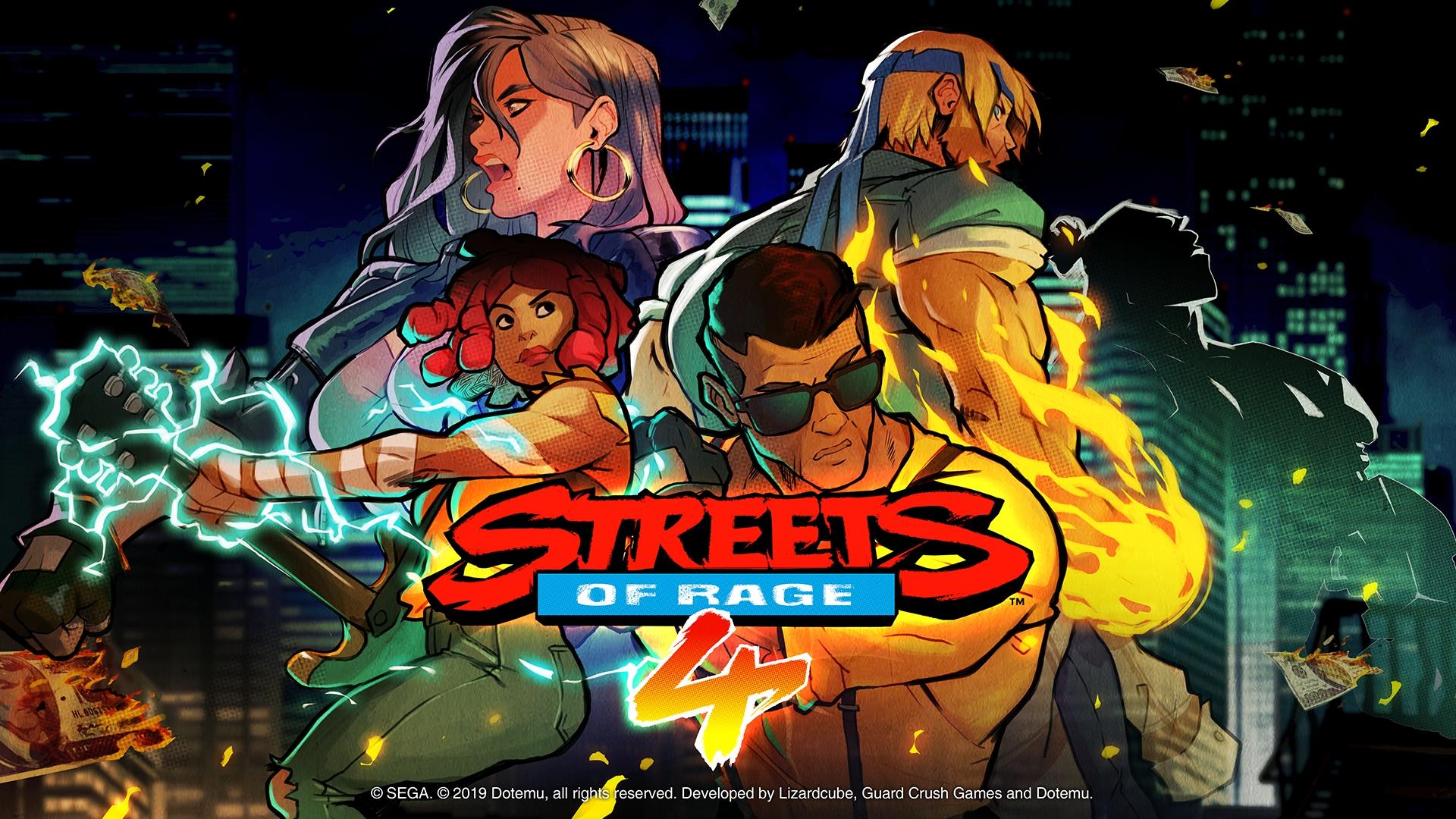 Streets of Rage is a side scrolling 2.5D beat ‘em up, much like previous series entries and other similar games reminiscent of coop arcade games. The premise is simple, walk forward and knockout any enemy in your path. I’ve played previous series entries and similar games in the past, so I knew what to expect, but I was pleasantly surprised by some of the settings lending themselves well to accessibility. So, I had to write a review!

This review focuses on the console version of Streets off Rage 4, specifically the Nintendo Switch version.

The accessibility of Streets of Rage 4 is good in some places and lacking in others. However, the type of game it is lends itself to simple gameplay, which is a huge plus. Thus, gamers could find it easily playable in the overall sense. I think because of the type of game it is coupled with the few solid accessibility features it does have, I can give it a rating slightly higher than that of my first review. So, Let’s give this game a C+ for accessibility.

To decide for yourself and your needs, please read the sections pertaining to you!

4 difficulty levels available at the start of the game: Easy, Normal, Hard, and Hardest. Mania is also available, but it must be an unlocked by beating story mode. Difficulty cannot be changed after creating a save file.

Even after choosing a difficulty, you can further customize by choosing an Assist in the form of extra lives and stars (for special attacks called star moves) at the cost of your score for the stage. Even though you lose some points, being able to customize the difficulty in two ways is welcome and gives some good overall accessibility to the game!

The audio options are straight forward, you can edit the SFX and the Music Volume. The game doesn’t have robust voice acting outside of grunts and such during attacks, so the voice volume is lumped in with the SFX volume.

There is an option to switch to a retro soundtrack, and while this doesn’t necessarily have accessibility implications, it’s cool so it needs to be mentioned!

Streets of Rage 4 has subtitles, but only during story cutscenes. There are no captions. More below!

The font is a mixed bag. In the pause menu, the font is not very readable when it is not highlighted by the controller. This font is very skinny and doesn’t have a great contrast with the backdrop. The option highlighted is much better, it is bigger, bolder, and a sharp yellow.

The story font at the beginning of the game is likely the best the game has: 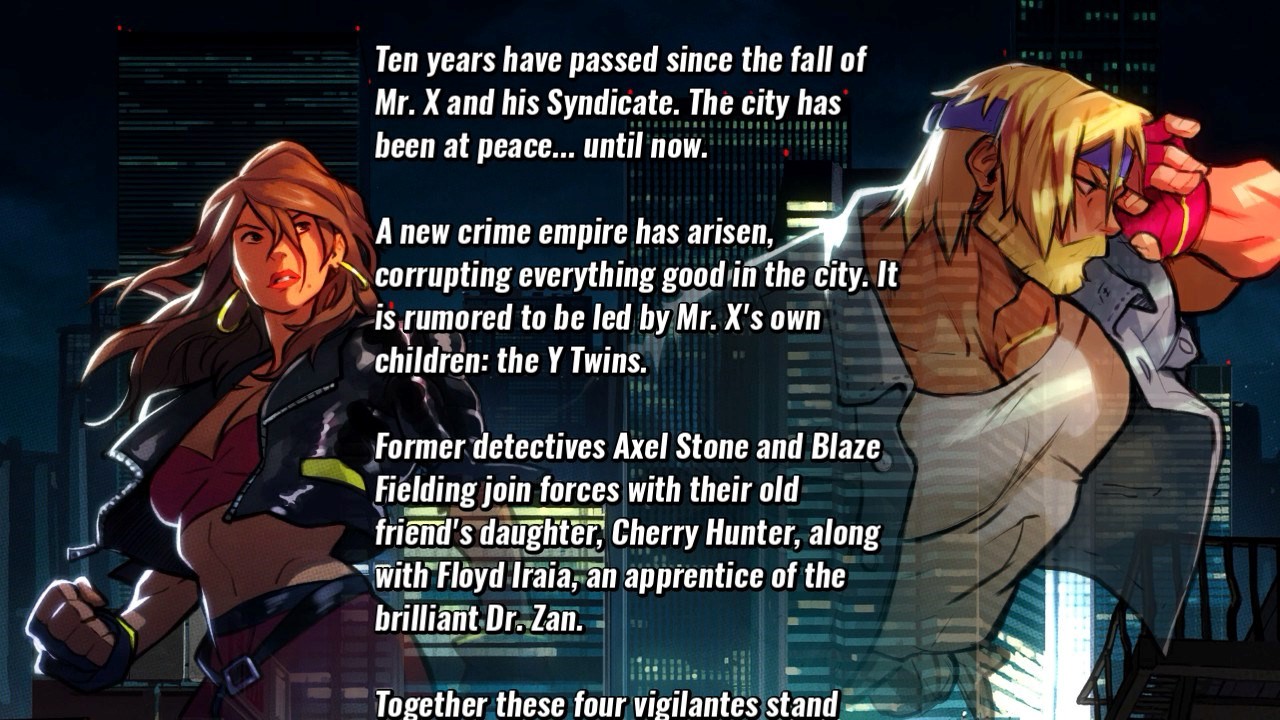 It is large, bold, and white with a strong contrast with the background. When I saw it, I was excited for the game’s subtitles.

But when I arrived at a cut scene between levels, I saw the subtitles, and my previous excitement fell completely flat: 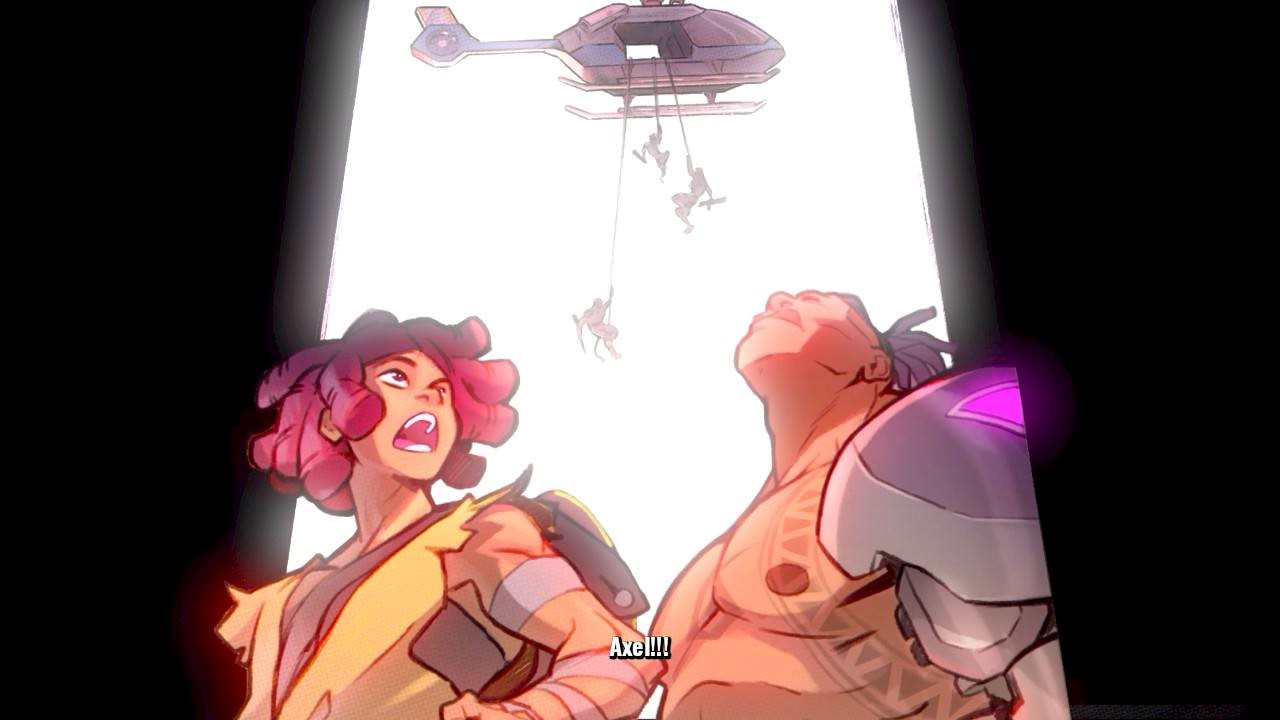 They were smaller, without speaker callouts (There is no dialogue audio, but still, come on!), and has contrast issues here and there depending on the image. In handheld mode, forget it, they’re way too small, which continues the unfortunate trend of subtitle size in games lately.

I’m conflicted over the accessibility of the visuals. On one hand, the characters and enemies on the screen are large and visually expressive. On the other hand, the color palette used has poor color contrast across the board. However, using the right in-game Video Settings may alleviate these barriers for some gamers.

There is a great amount of video options in Streets of Rage 4! However, some of them merely tease you for the accessibility greatness they could have provided, read on.

You can customize several video related aspects during the game, right from the pause menu. In the pause menu, the game screen can be seen in the background, so you can preview the settings as you play around with them to find the right fit for you. Some of the settings, like Ambiance Factor and Background Details are very subtle when changed, at times gamers may not even notice the change, I know I didn’t. I needed a friend to send me screen shots from stage 5 showing me what these settings actually did. On the other hand, some of the settings were quite impactful for accessibility and those will be discussed below.

Screen Shake has three settings, All, Reduced, and None. This is an accessibility win for some gamers where a shaking screen can heavily impact their play.

I found the game’s default brightness to be way too dark, so I changed it from 100% to 200% and suddenly could see so much better: 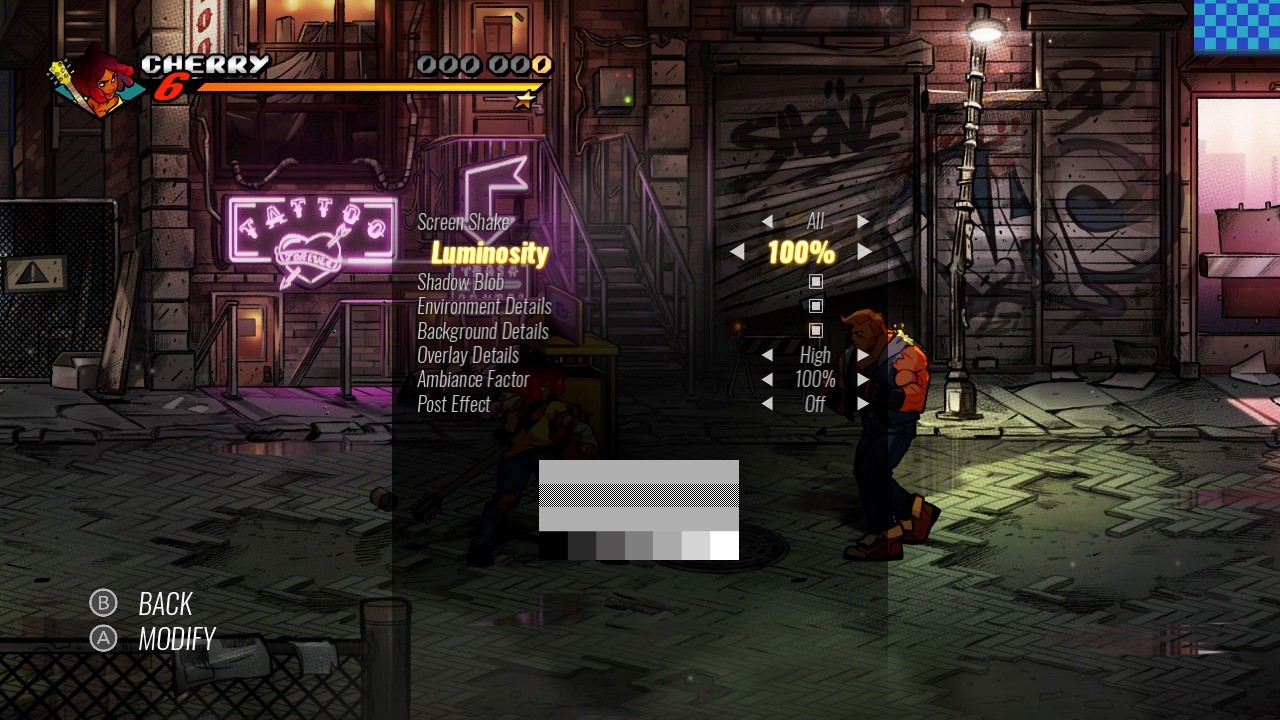 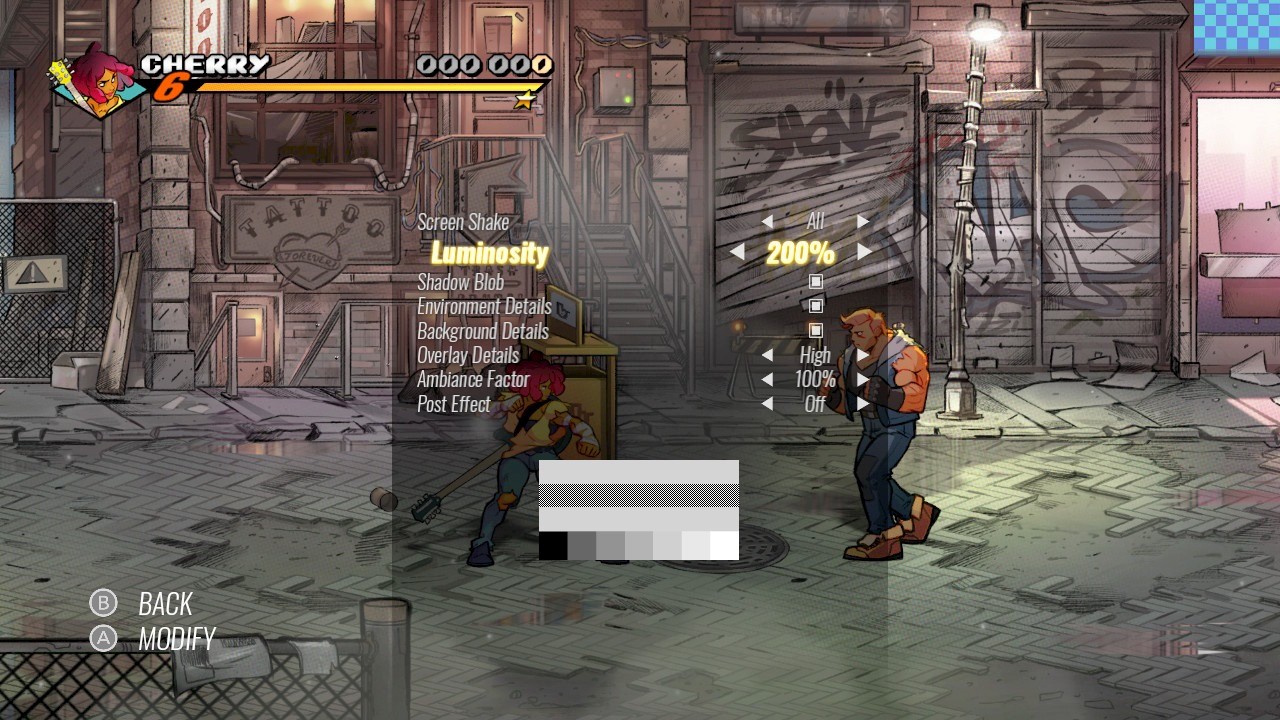 Even with the characters being obstructed by the pause menu’s backdrop in the screen shots above, the 200% brightness makes a noticeable difference. Also of note, the black outline every character has is more prominent at 200% luminosity and thus has better contrast against the background compared to 100% luminosity; that could be helpful for some gamers. For the rest of this review, the screen shots will have this luminosity, it’s just so much better from this reviewer’s point of view.

There is an option for customizing viewable Overlay Details, like fences and thick steel girders, that can get in the way of seeing your character. If you’re finding it difficult to see your character at times, you can even turn these off completely! The same goes for Environmental Details, like rats and trash littered on the streets of the game’s city, if you don’t want these distractions, you can turn them off too and just focus on the action.

Even though those are great, there are portions where your character is inside something, like a broken-down train, and the settings you choose here do not matter, your view is obstructed no matter what. This could be a big barrier for some gamers. 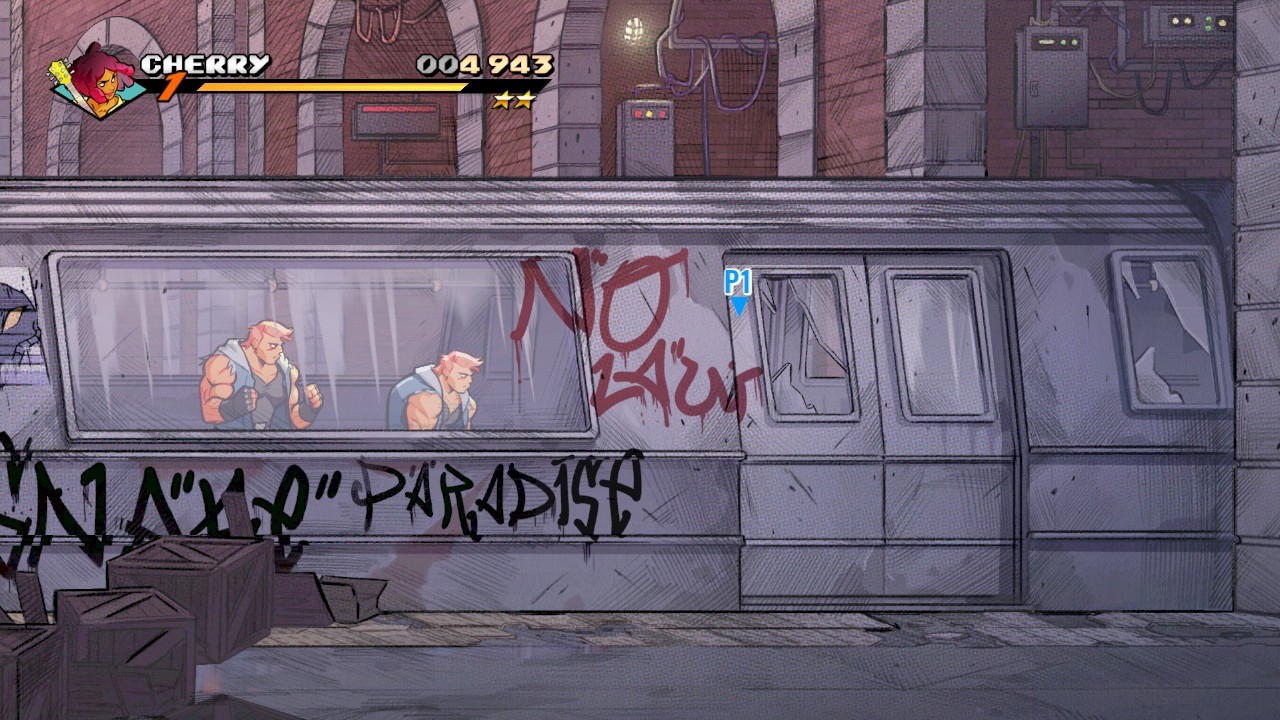 Where am I? Good thing I turned on Player Count for Arrows in the HUD settings, at least here I could see my P1 arrow so I have an idea of where I am…How awesome would it have been if obstructions like this could be edited in the Video Settings? This is a huge accessibility oversight to me.

While not an in-game accessibility setting, it is worth noting that Streets of Rage 4 is a good candidate for play with Nintendo Switch’s Zoom feature. Being 2.5D, with clear upper and lower boundaries, and overall movement being primarily left and right, Zoom could be really helpful for gamers in need of it. You can, for example, Zoom in on a particular region of the screen and let the enemies come to you where you can see yourself and them more clearly.

Streets of Rage 4 for the most part is a visual treat and this lends itself well to visual cues. Every action has a visual associated with it, landing hits shows large comic book like yellow “explosions”, while being hit your character recoils and visibly vibrates.

There are only a few notable concerns, and they involve visible shine. The shine used to represent consumables and weapons that can be interacted with is very subtle and the animation stays within the object itself. This means that gamers with vision challenges may completely miss the cue and not know these items can be interacted with, especially in handheld mode where everything is smaller. The same goes for charging one’s Attack button for a strong attack, when charged, the character shines once, and it is very quick. The work around here is that the visual for the strong attack is obvious, so the player can simply learn the timing to execute it. Regardless, these visual cues could have been made more obvious and this is an accessibility fail.

Being a beat ‘em up style game, Streets of Rage 4 is very expressive with its audio cues. It’s easier to list the actions that do not have sounds. Every hit given or taken has a sound. Jumps, dashing, all have audio cues with them. This reviewer only found two actions that did not have sounds, and they were grappling and walking.

There are 11 levels of vibration intensity to choose from, including none at all. This is great, but Streets of Rage doesn’t do anything especially helpful with the vibration. Which is too bad, the Nintendo Switch has the ability to have very expressive vibration, and this functionality is not taken advantage of.

It would have been a huge accessibility win if the game had directional vibrations. Imagine playing with two Joy-Cons and the left one vibrated when you were getting hit or landing a hit on the left or the right Joy-Con on the right! That could have been huge for blind gamers.

Streets of Rage 4 lets you partially remap the buttons. You can easily remap actions from the face buttons to other face buttons or the shoulder buttons, but you cannot map actions to the stick or D pad buttons. The D pad likely cannot be mapped because it is available as a second option for movement if players find that better compared to moving with a joystick.

While the controller remapping is not full, as it should be, there are some notable options improving accessibility. These options allow for two methods of input for certain attacks. For example, on the Nintendo Switch, B and Y pressed together can be a Back Attack, or you can instead map a single button for that action. You can even turn off the double button version of these attacks to reduce the chance of accidental inputs.

There is also a “Legacy mode” controller config where shoulder buttons are turned off and simultaneous double button presses are prioritized for certain actions. This mode’s buttons cannot be remapped to the same extent as the default mode can, however.

There are only two actions noted by this reviewer that required a holding of buttons. They are dashing (tap and hold a direction of the stick) and strong attack (hold Attack for about ½ of a second, then release). Every other action is a tap of a button, or rapid tapping.

To do the basic attack combo, you have to rapidly press the Attack button. There is no setting to change this, but there is a slight work around that may help some gamers where rapid button mashing is a barrier. For fast hitting characters like Cherry, the first two hits of the basic combo need to be quickly tapped, but once the combo has initiated, the last few taps can be noticeably slower. This means players might not have to rapidly press Attack for the entire basic combos for the characters they want to play. It’s worth experimenting with!

Even though Streets of Rage 4 is retro inspired, it is noticeably easier to hit your enemies than it was on the arcade games of old. Even if you’re not on the exact horizontal line as your enemy, if they’re visibly in front of you, you’re likely in range to land a hit, or take one!

Additionally, most of the enemies come to you, and this can be used to your advantage from an accessibility standpoint. You can conceivably be stationary and focus on reacting to enemies coming to you. Such a strategy could potentially reduce the amount of simultaneous button inputs you need to make as you’ll be focused on one thing at a time, either moving or fighting. Mileage here may vary, of course, depending on your need as a gamer. This strategy likely is best done in Easy mode, and maybe in coop with a friend in the later levels when things undoubtably get more difficult.